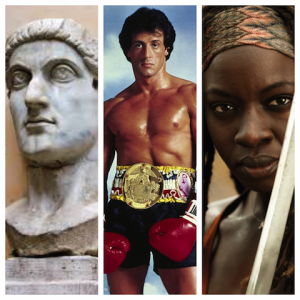 The first word picture God gave me was Constantine. Not the t.v, show (not a fan) or the movie with Keanu Reeves (liked it) but the emperor. Emperor Constantine was the first emperor to convert to Christianity and he made the Christianity the official religion of Rome. After 200 year of persecution, crucifixions, and gladiator games, Christians could take a deep breath. But was that a good thing? Did it lull believers into a false sense of security? Christianity had been legitimized and civilized. Is this where we are now in America?

Rocky III is my favorite Rocky of all time for various reasons but the one that stands out is because of the conversation Micky, Rocky’s manager, has with Rocky midway through the movie.

Micky ” The worst thing that happened to you, that can happen to any fighter: you got civilized.”

This movie isn’t just abut boxing but about the seasons of a man’s life. Rocky had grabbed the brass ring. He was the champ, but he got soft. He wasn’t hungry any more. This is what can happen to Pastors, Preachers, churches, youth groups, and any believer.

As youth pastors we can achieve a modicum of success (a good crowd, a name on Twitter, etc.) and move from visionary to manager in seconds. We become aquarium caretakers, making sure the fish are fed and the tank is clean, but, and the days of deep sea fishing are mere flashbacks. The worst thing that can happen to a leader, a pastor, a youth group is that he/she forgets that there are still people lost in the world. Instead of launching the boat out one more time for a great catch, we sit at dock and wash the boat. Do you miss it?

Alexandria from the Walking Dead. Alexandria is attempting to have normalcy while all around them the zombie apocalypse rages on. When Rick and his group shows up to Alexandria they quickly find out that these people are not prepared for war. Ricks group discovers that then people of Alexandria:

Are not prepared to deal with death.

Have lulled themselves into a false sense of security.

Leave their own to die if it requires risking their lives

Has this become the church? Has the church lost it’s taste for battle and settled for wall building instead?

Sure, Rick and the group were probably on the run too long. But who was better prepared to deal with life? I’ll take Rick’s group any day. There are times we want to hang up our swords, like Michonne did. There is a time for war and a time for peace, but we can never buy the lie that the war is over.

Were are you on the civilized spectrum?

Would you still consider yourself a “hungry” Christian?

What would it take to get you out on the boat one more time?

This site uses Akismet to reduce spam. Learn how your comment data is processed.