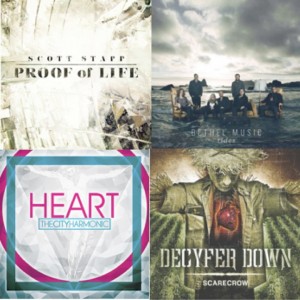 You may be be wondering what metric I have used to decide how these albums made my list. It’s simple, you make the list if  I can listen  to the whole album, beginning to end without skipping a song. I thought the albums, overall, were great this year. We used much of the music from these albums in our game time, worship time, our youth group videos, and in the dramas we performed.

On My Way To The Sun – John Elephante

I have been a fan of John’s from his time in Kansas, to his band Mastedon, to his solo albums. This, in my opinion, is his best album to date. It takes guts to kick off your album with an 11 minute jam and it just picks up from there. We did a drama to the song This Time that had many of of congregation in tears. It’s probably my phase of life that has me so keen on this album. Lines like :

Make me feel like I’m looking in a mirror.

I love a good comeback story. I was a big Creed fan in the 90’s, and I watched on t.v. as Scott went through a miserable stretch that fame can sometimes bring and I felt for him. I had always felt that Scott was a believer and this was just his time in the pig pen until he “came to his senses” and came home to the Lord.  I feel like this album tells a humble story of coming back and looking ahead. Some of my favorite lines are:

or the chorus from Break Out

Although Scott’s voice is not Creed quality anymore, it’s exactly what I like about it. It’s the passion and raw fight he displays that puts this near the top of the list. Don’t even get me start on Jesus Is A Rock Star and Hit me More – “Went through my hell to find my heaven”.  Solid gold.

I went to the National Youth Workers Conference this past November (you can read about it HERE) and was introduced to Audrey Assad as she led worship for a few sessions. I felt like a I was physically transported to another place, a Paul in the third heaven kind of deal. I wept, I worshiped, and I felt like God had laid his hand upon me during that time.

Beautiful worship that just takes me “there”.

Andy tell his story with some great lyrics and jams. I must have played The Saints a hundred times.

I saw these guy in concert at Winter Jam. They were a solid live band and their CD was played quite a bit in the youth hall. To be honest this is the only Building 429 album I have really payed attention to. The lyrics and message are strong and are something every Christian kid or adult can enjoy. Their sound has evolved and I guess my taste in music has as well. I really can’t pick a favorite song, but if I had to …Bon Fire…no Won’t be Shaken. no,,, Get up?… See what I mean?

I have no ideas where these guys came from, but I want more of them. I’ve used several of their songs for our Sunday Night S.O.A.K time and I plan to use a few more. This album is like hot chocolate for my soul and gives me hope for the sound and direction of Christian worship.

I saw these guys at Enfuego music festival and man did they tear it up. This band’s epic sound  transports me to  the mountain top. My favorite song is Love, Heal Me. It’s short, catchy, and is often my prayer.

Pure Rock and Roll,. plain and simple. In my opinion, this is there breakout album (even though they have three albums to their credit) . Their are other albums were good, but they sounded a lot like everything else at the time. This albums stands out musically and lyrically,; take the song (really an ultimatum) to the Westboro Baptist Church and tells them to get back to Westboro. It’s a great jam and message to those who would falsely represent Christ. Oh, and thank you Decypher Down for bringing back guitar solos.

Other great songs on the album

Bleeding Lies , The River, and the song that almost doesn’t fit on the album Wake Me, but am glad they included it.

The Mystery of Faith – Glenn Packiam

I downloaded this album earlier in the year and used it for the Easter Prayer Stations I created.  The whole album fits perfectly with the season and expresses the victory we have in Christ as his Church.

Catchy songs like This Amazing Grace and Holy Light have me dancing ( I am Pentecostal ya know) and songs like When My Heart is Torn Asunder just own me with lines like”My body might be dying by I’ll always be alive.” Love it.

Leave your list in the comments below and you could win a free ITunes download  of our choice (9.99 or under).

I’ll be choosing a winner on Monday.

Lecrae CC4 is now out and it is the fourth, and last installment, of his church clothes mix tapes. Church Cothes was Lecrae’s way of dishing out hard truth’s to the church and he, again, pulls no punches when addressing those who call themselves follower...