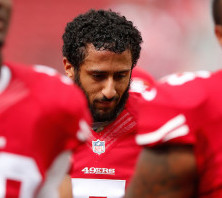 I love the protester. I applaud the rebel. I love guys who puts it all on the line. And yet, I don’t know how I feel about Colin Kaepernick.

The fact that Colin is a pro-athlete should not prevent him from expressing himself, but he knows it has repercussions. His actions affect his teammates, the NFL, his family, his contract, and his endorsements.

He wants to get a message out and he is willing to defy the traditional respect offered during the National Anthem to get it out there. My dad was a marine and loved America. I will often stand during games I’m watching on t.v. just to show respect. I am conflicted abut Colin’s choice, but maybe he is too.

As a youth worker, I share stories of great men and women of the bible who defy social norms at perilous odds because of their faith in God. Shadrach, Meschach and Abednego would not bow to King Nebuchadezzer when the music played. They paid the price of being thrown into a furnace and then saved by God from the flames.

Colin is no bible hero, and God may not save him from the fiery furnace of the internet, but his stance is no less admirable in the face of the cultural backlash he is receiving.

Many will watch Colin, now, not for his athletic skills but for whether he will sit or stand.

As believers, the world is watching us as well, to see if we sit or stand in the face of social norms.

What will you be doing “when the music plays”?

What do you think?