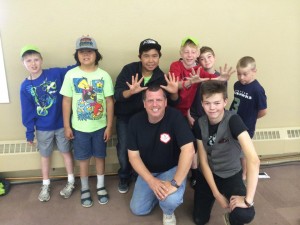 Good morning all.  I just got back from Alaska (Saturday) with a fantastic group of people from our church. We had mom’s and daughters, mom;s and sons, and a scattering of youth and young adults and myself and today I want to share 10 Things I Learned On My Mission Trip

Well I knew that before hand but before the trip I felt like he was working me overtime to get me to believe things that were not true. Things about my team, myself, and our mission. None of mt F.E.A.R’s came true. Fear stands for False Evidence Appearing Real. He almost got me, but the truth of God’s word saved the day.

2. Our students stepped up bigger and better than expected

Now, I know my kids are awesome, but for all of them save one, this was their first mission trip, ever. I could not have been prouder of our students. They worked hard with the camp kids, they all got along really well, and kept griping to a minimum.

3. Children can handle the truth

I am a Youth Pastor, I don’t usually do kids ministry unless I have to. It’s not because I don’t like kids, it’s because I feel awkward/ I tend to speak about issues and in a way that might be above their heads. I don’t intend this, it just happens. Anyway, these kids (some of who were in foster care) received some straight talk from the guest speaker and responded with open hearts. Kids can take meat in small bite sized, chewable pieces.

I grew up a camp kid at a camp where we were assigned cabins with a counselor. When I grew up I became a counselor and did six or seven summers as a counselor. Now, it’s been a long time since I have been a counselor with kids I had no ideas who they were, but I found my “counselor heart” to be a little dusty but still in tact.

From the water to the mountains and all the lush forest in between, it;s beautiful country. We took the boat tour from Seward and saw whales, otters, and many more of God’s creatures roaming free.

6. I could not live in Alaska

As beautiful as Alaska was, I could not live there. It’s a five hour plane ride from Phoenix. Once you are in Alaska you are there unless you really like to fly.

During my time in Alaska it was daylight 24/7. On the last night of camp the kids did midnight swimming and it looked like ti was 4 in the afternoon. I am noticing, now that I am home, that my sleep patterns are messed up. Lawd! Help me!

8. I way over packed

I had a ton of clothes I did not wear. Gonna go skinny on the next trip.

We dd not see the moose get hit by the car but we saw the damage a moose can do to a car.

10. I met a kid whose middle name was sourdough

I learned that if you were a long time resident of Alaska they called you a Dusty Sourdough. This kid dad’s name was Dusty and his dad put sourdough in his name. Weird and cool at the same time. If this were my name I have a feeling I’d get hungry every time i wrote my name down.