This Is Why Kids Hate The Church, According To Andy Stanley

Since the writing of this Andy has since apologized on Twitter and gives a longer interview here on what he said and why he said. I knew it would all work out. 🙂

Andy’s already been put on the cross, called a heretic, a false prophet and an all around terrible person? Sorry Andy, I couldn’t saved you but maybe I can help people understand what you might have been trying to say, sort of.

If you are unaware, Andy Stanly is the Pastor of North Point Community Church in Georgia. He’s a great teacher and communicator or at least he was until he said this…

Well, there was a video here until North Point claimed copyright infringement. But you can watch it below as I share some commentary with my YouTube subscribers.

I like to study people, and what I am seeing here is a man who has had a ton of negative conversations and feedback from people about himself, his church, and his ministry. What I think I am seeing here is a cracking moment. Something sent him over the edge, much like Howard Dean of a few years ago during his run for president. Andy, I think, finally let out a “scream” against all his haters to relieve some pressure, much like when we have gas, and it equally stinks.

I’m not excusing Andy , I don’t know him, I have never read any of his books, but I have listened to his podcast a few times. I am not here to defend or accuse Andy but I will not be joining the Torch and Pitchfork brigade to his church doors. This primal outburst is as terrible as it sounded, but, we should also  ask, “Is there ANY truth to what Andy said?”

Let me share my church journey before  break this down. Most of the churches I have worked in have been 500 less.

Every church has been different and I have had kids who both loved and hated the churches their parents drug them to every week.

I understand this, high school and middle are at different levels in so many ways. In a perfect world, every church should have a Middle School Pastor and High School Pastor to meet the needs of the separate groups but it’s not a pre-requisite to having a successful youth ministry that produces generational believers.

All of my youth ministries have met together, for the most part. There are times and seasons where we met separately for small group time etc. There have been times where I have tried to start separate ministries and in every case you would have thought I said, “We are going to sing hymns every service.” The push back was incredible. Theses groups were tight knit and they wanted to stay that way.

A youth pastor can only follow the culture of it’s leader. If the philosophy, ideology, or theology of separate is not coming from our Pastor we are running up a hill with oil running down hill. Most churches are not cohesive enough to bring about the changes needed as good as they are. So, youth ministries form the identities they have with what they have and most work out fairly well.

Around 1:25  into the video is where it starts going off the rails. Andy says that if anyone wants to be in a small church it’s because we are selfish and are denying our kids the chance to love the church .

I don’t know about your church but I have 35-40 kids who show up regularly and they love each other and love our church. In fact it’s the first church I have been a part of where many of our un-churched kids are willing to darken our doors on Sunday morning. I attribute this to good leadership, strong community building and a “one church” mentality among the staff. There’s no youth church or big church , just The Church.

Kids can grow, be happy, and love the church in a small church and it’s arrogant to think otherwise. I do appreciate Andy’s gall though. He’s saying our loud what many mega-church pastors probably think, but their wrong.

Kids don’t love the church because they have big youth ministries, kids love the church because of a loving community and because someone in that church has taught them and shown them what it means to BE the church. That Pastor or youth pastor who casts the vision of God’s bigger plan of the church and our place in it; goes a long way to kids sticking around and wanting to be a part of that vision.

“You drag a kid to a church they hate”

Well, I don’t know many teens (including my own), or adults for that matter, who like to get up on a Sunday morning and go to church; but, on the whole, teens don’t hate church, they hate the service. I know where Andy is going with this, and there’s some truth to it. Let me tell you what kids hate

This is due to age and biology not willful intent. There’s plenty to hate about church services but these qualities are not relegated to small churches. There are big churches who do the same thing, just with better sound equipment and nicer carpet.

All of the negative things I mention about what kids don’t like about church services are easily fixable in any context. But, if the service is all about excitement and absent of the Holy Spirit and loving communities, it won’t matter how large or small the church is, kids are baling.

So, where does Andy get it right?

High School and Middle School need seasons to be apart for things like sex talks, community building, etc. Each group does have it’s own needs, but God is not hamstrung by the fact that our groups do mot meet separately. When I call kids to the alter there are middle school kids, high school kids, and college kids. The ground at the cross is even enough for everyone to stand there.

We can minister to every age group through the week, through social media, through visitation. Every ministry need does not have to be met, and BTW won’t be met on one meeting.

Small churches need to step up their game

I love how all these youth pastor’s Ive read pile on Andy, when in reality, many of them want large youth ministries but are either too lazy or to ill equipped to do so. They know good and well if they had the budget they would try to pack their youth rooms to the hilt and then justify needing a Middle School pastor just so they wouldn’t have to do it. (rant over)

Small church could make small changes to increase their chances of kids coming and staying at their church, Like

but most won’t because it’s too much work, requires too much money, and no one wants to change which leads to unhealthy churches which lead to kids having to endure a service that never connect with them.

What do I mean by unhealthy? I mean

A church can become healthy with strong leadership, a commitment to their community, and a commitment to raising up loving disciples instead of scripture quoting church goers.

If you have spoken against Andy, I get it. Knee jerk reaction right? I think the verse about planks and splinters comes in handy for all of us from time to time. Here is what is to come, I hope,

Instead of railing on Andy, let’s pray for him during this awkward Junior High moment and let’s look at our own youth ministries, pray and seek God, step up our game, and maybe we wont see so many kids go to that big church down the street.

Since the writing of this Andy has apologized via Twitter 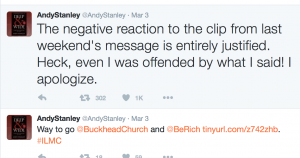 And gives a longer interview here on what he said and why he said. I knew it would all work out.
Thanks for praying.

Is your church/youth ministry predominately healthy or unhealthy?

Any of the reasons I mentioned?

Where do you need to step up your game?

How can we do a better job of showing kids a right image of God’s church?