7 Lies Youth Pastor’s Have To Overcome To Succeed

I imposed a false realty on myself that has bitten me in the but more times than I can count and it all started with a lie. A false belief that made it’s way into my actions and sabotaged my future. Tackle these 7 lies with the truth and watch your life and ministry turn around.

Having the feeling that you you are not who you say you are is disorienting. Because of a sin you;ve committed or your passion level is off you feel like you should not be up in front of kids or that you should not even be in the ministry.

The Truth: We’re all impostors and no one deserve to do what we do. We are all victims of God’s grace. The Apostle Paul said. “I do not understand what I do. For what I want to do I do not do, but what I hate I do.” You are redeemed. God knows exactly who you are just like He knew who Gideon, Jacob, and Paul was when He called them.

Everyone is against me

Paranoia may keep you alive but it will also isolate you. If everyone is against you, you have some serious character flaws. It’s easy to point the finger at others (Pastors, Deacons. Parents, etc.) and say they are the reason I can’t succeed.

The Truth: There are some people who will be against you. For whatever reason they do not like you your vision for the ministry, your skinny jeans, whatever. There are more people who want you to succeed than fail, they just need to see you trust others and be open to other ideas.

I have to have x amount of kids to succeed

Numbers, Number, Numbers! I could not get that out of my head. I had to get more numbers to see myself as a successful youth worker. if numbers are your only measurement then when numbers fluctuate so will your perception of yourself.

The Truth: Yes, numbers are important. Your Pastor will ask about them and you’ll be judged by them but more important than the size of your youth ministry is the health of your youth ministry . Adding lots of kids to an unhealthy ministry means you have a lot of unhealthy kids.  Jesus taught 12 for 3 years and influenced hundreds more (the 70, etc.) and I think that turned out pretty well. Small healthy beats big and sick.

I am the ministry

I call this this the Jack Nicholson effect. It’s when we say things like “This ministry would fall apart without me.” or “You want me on that wall. You need me on that wall.” Egomania is a beast, that if let out, is hard to get back in the cage. 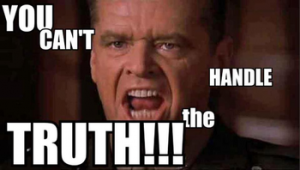 The Truth: We are not the ministry. We are servants of the Most High God who called us first to be sons and daughters of His and secondly to die to ourselves and allow His Spirit to work through us. If the ministry would fall apart without you then maybe it should just fall apart. Anything built without God’s hand will fall apart eventually. Our work will be revealed revealed in the end ( I Cor 13:11-130

My way is the best way (or everyone else is stupid)

This lie maybe be the biggest lie I have told myself. I have had a lot of great ideas in the past and have executed on those ideas but in the end  they were hollow. They were lone victories where I was high fiving myself.  On many occasions I have bulled an idea through and it failed miserable. Let’s just say that A mouth full of crow is not my favorite meal.

The Truth: We may have A WAY but it may not be THE WAY or THE BEST WAY for your youth ministry or church. Listening to other voices is critical to test our ideas. If someone disagrees with your ideas this does not make the stupid, ill informed, but not stupid. It’s our job to educate others as to why something will work and then think of every reason why it would not and answer those questions. Proverbs 15;22 says, “Plans fail for lack of counsel, but with many advisers they succeed.”  our ideas need other people to make them better and to allow people to add value to them.

Everything depends on me

Robert Schuller had a saying, “If it’s got to be, it’s up to me.” I get it, if something is to be I have to lead it. Unfortunately I took this to mean I had to execute it as well. In doing all the things to make it happen the Elijah effect started to set it. Elijah believed he was the last prophet serving God when in fact God had hidden  away 100 prophets away in two caves (I Kings 18:4) .The lone wolf mentality made me feel holy and self righteous but it only made me weak.

The Truth: Everything does not depend on you. We maybe be the head of the spear but no one chucks just the head of  the spear at an oncoming enemy. Ministry requires team work. Building a team around yourself gives your the protection, feedback, support and leverage to allow God to do big things. The lone wolf mentality is both unproductive and dangerous. Isolating ourselves only leads to more lies.

You have to work harder

If this were only true. I used to say “You may do a lot of things better than me but you can’t outwork me.”  This lie may have made me feel like I was getting more done but it only burned me out. Telling my self I needed to work harder was like a pilot saying “I have to get out of the plane and push to make the plane go faster.” Yeah, that doesn’t work.

The Truth: Work smarter not harder. All the needless hours we work, to make ourselves feel valued, could be spent in training others, becoming more organized, and educate ourselves making these hours matter even more.

Protected: Youth Ministry Round Up #110

END_OF_DOCUMENT_TOKEN_TO_BE_REPLACED

How To Grow Your Youth Ministry To 100 Students

“Need a youth pastor with vision to grow a youth group to over 100 engaged youth. Church in upper Midwest. If interested, contact me. Full time position.”– Facebook Post I read this and thought to myself, “This is ridiculous”. And many...

END_OF_DOCUMENT_TOKEN_TO_BE_REPLACED

Who Should Handle This Problem?

As youth pastors we are faced with handing problems from time to time (ok, all the time). The questions we have to ask are 1. Who’s problem is it? 2. Who should handle it? I was recently dealing with a situation where it was suggested we ask out Pastor to get...