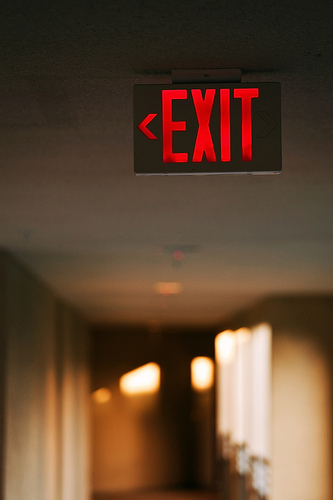 Kids can leave for any number of reasons. I recently lost a kid, not because of our program, but because of a church/relationships matter. Many kids slip away into the night and we don’t find our for weeks that they’ve quit coming. What I respect about this student, is that they wrote and told me they were leaving. They told me it wasn’t anything  I did, but they had to follow their family. What I hate, is losing a student that has so much potential. I miss the fact that I will miss their spiritual journey; to watch them grow, fail,and grow some more.

Here are a few ways to prevent or manage the damage of a students exit.

If you have some students or parents on the edge, meet it head on. Begin a conversation about what’s going on with their lives, give them a chance to vent. Let them put their struggles on the table. Don’t flinch, listen.

2. Strengthen what you have

Make sure you are calling or meeting with kids beyond group time. We can’t just phone it in anymore. Try some unplanned, impromptu stuff like a lunch, one night camping trip, or a quick road trip. Building community and relationships have to move beyond the youth room.

3. When a kid leaves, find out why

I used to not care, no, really, I didn’t . I felt like it was on a kid if they didn’t want to be here. Now, I try harder to weigh each case and be more proactive. I sat down with a students once who told me they were leaving, I could not convince her not to leave. What I did challenge her to do was tell the group why she was leaving. She did, and it erased any speculation and chatter of why she was leaving.

4. Encourage kids to see the future

When a student leaves, and it could effect others, move quickly to rally the troops. Talk with them about the future and the vision of the youth ministry. Share with them how you see them making this happen and that they are valued.

5. Don’t close the door or give away their seat

Kids are fickle. Whether they leave by their own choice to another group, or whether it  be a heat of the moment decision or a gradual drift, keep communication lines open. I have had kids leave and come back a year later. I have kids who went to other groups but still call me when they have a problem. Just because a kid is not in your group any longer, does not mean God has released you from them or cancelled any future plans to minister to them. Oh, that girl that left my group and told the group why she was leaving? I am performing her wedding this year.

You can’t stop kids from leaving. It’s part of the job. We have to learn, as hard as it may be, not to take each one personally. We have to look to the Lord, who Himself had a mass exodus at a critical time in his life. Yet, we find Him visiting with those same disciples, eating fish and chatting around the fire about life. If He can do it, so can we.