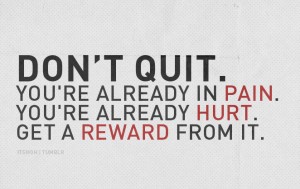 I quit a lot, at least mentally, I quit my job, my life, etc. multiple times a day but I am getting better at

“casting down imaginations, and every high thing that is exalted against the knowledge of God, and bringing every thought into captivity to the obedience of Christ;”

The spirit of quit is part of human nature attained through the fall of man.

Eve quit listening and believing in what God said so she quit and ate of the fruit.

The spirit of quit is also demonic in nature because the Devil wanted her to quit and and has been encouraging believers to quit ever since.

As believers and youth workers we have to persevere if we are too see the promises of God become reality.

I was joking with my wife last night that the longest we’ve have been at church is 5 year and an average of 4. I joked that ever 4 years at a church is like getting another degree. Except, as I thought about it some more, it became less funny and more sad. I quit, in my mind, for good reasons, but maybe they were not good enough. Maybe I just quit because I couldn’t or wouldn’t trust God with my pain, my anxiety, and my disappointments. I made a deal with the devil, “If you leave me alone, I’ll quit.” Kind of like when I had my kidney stone.

Sad right? Here’s the good news. I can cast the spirit of quit out of my life if I want. Every time I despair, every time I am saddened by the behavior of other believers and the smallness of their dreams, I want to quit, but I don’t have to if I don’t want to.

I have to take control and speak out and say “Spirit of quit! Get out of here!” And it must leave in Jesus name.

Hannah could have quit praying because she was mocked as drunk, but she did not and produced Samuel.

Sampson could have quit, he had every reason to, he was beat up, eyes gauged out, and enslaved by his enemies. But he did not. He said, “Sovereign LORD, remember me. Please, God, strengthen me just once more, and let me with one blow get revenge on the Philistines for my two eyes.”. He killed more that day than in his whole life time.

The woman with the issue of blood would have quit, but she had one more idea, touch the tassel of the Master. The One who could heal her. She fought the crowd and her own shame to touched Jesus and she was healed.

Jesus could have quit, multiple times, because

Those are enough for any of us to quit over three years of ministry, not to mention the suffering of

– the beating
– the whipping
– the mocking
– the cross

Instead of quitting, Jesus took one more to heaven with him.

“Therefore, among God’s churches we boast about your perseverance and faith in all the persecutions and trials you are enduring.” I Thessalonians 1:4

I want others to say of me “That guy endured a lot. It must have been God because I would have quit if that were me.”

Cast out the spirit of quit, decide to persevere instead, and you’ll see the fruit of your perseverance.

Tell me about it in the comments.