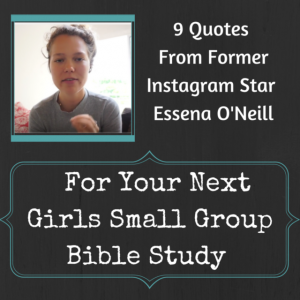 I saw this article on Buzzfeed and it made my heart jump to see a teenager, Essena O’Neill step up to the microphone and call out the phoniness behind many of the Instagram photos she took and the general phoniness of  business of  social media.

I am not a girl, or a small group leader for girls, but if you are, you’ll know exactly how to pose these questions so girls can engage and share.

“Yeah 16-year-old Essena would have been like ‘WTF girl you have the dream life,’” she wrote. “So why did I feel so lost, lonely and miserable?”

“I was addicted to what others thought of me, simply because it was so readily available,” she wrote. “I was severely addicted. I believed how many likes and followers I had correlated to how many people liked me. I didn’t even see it happening, but social media had become my sole identity. I didn’t even know what I was without it.”

A 15 year old girl that calorie restricts and excessively exercises is not goals. Anyone addicted to social media fame like I once was, is not in a conscious state,” she wrote on the above photo. “…Stomach sucked in, strategic pose, pushed up boobs,” O’Neill wrote. “I just want younger girls to know this isn’t candid life, or cool or inspirational. It’s contrived perfection made to get attention.” “What is the obsession with trying to look older, sexier?” she wrote. “‘Please like this photo, I put on makeup, curled my hair, tight dress, big uncomfortable jewelry… Took over 50 shots until I got one I thought you might like, then I edited this one selfie for ages on several apps- just so I could feel some social approval from you,’” she wrote. “The only thing that made me feel good that day was this photo,” she wrote. “How deeply depressing. Having a toned body is not all we as human beings are capable of.” “If you find yourself looking at ‘Instagram girls’ and wishing your life was [their’s]… Realize you only see what they want,” she wrote. “If they tag a company 99% of the time it’s paid.” “Without realizing, I’ve spent majority of my teenage life being addicted to social media, social approval, social status and my physical appearance,” she wrote. “Social media, especially how I used it, isn’t real.”

Her last Video on YouTube. Warning: She uses some salty language but she’s  pouring her heart out.

Essena has a new website called Let’s Be Game Changers where she seeks to be her authentic self.