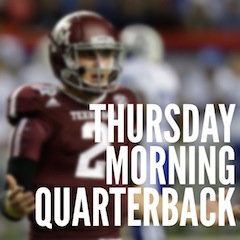 I am starting a new weekly series called The Thursday Morning Quarterback. This phrase comes from the the term “Monday Morning Quarterback” which is/was a term for critics, journalists, and every day fans who like to chime in about the game they didn’t play in but feel like their qualified to  know what everyone should have done in the game.

No one knows better than a youth pastor of how Wednesday night or whenever your program meeting occurred. You planned it, designated the goals, and executed it. There always things we could have done and there will always be critics of what we should have/could have done, but  we are still the most qualified to judge our actions.

Let’s use this Thursday morning approach not look at the game film and see where we succeeded, failed, and can get better. Let me start with a critique of myself. On watching my performance on the jumbo tron screen of my mind, I saw myself  under valuing the students who  came to be a part of weekly program. I saw myself dejected and sharing that dejected spirit in from of my kids. I was mic’d up and heard myslef say “Where is everyone?” to announce my displeasure at the size of the group that showed up. I quit saying that a few years ago and when a kid would say that  I would say, “What do you mean? All the important people are here.”. Of course I said that with a grin and if someone else walked in I would say “Look , another important person has arrived!”

For me, it’s important to value the kids who come. Thank them for serving. Compliment them if they did something good. This kind of investment has paid off as many kids come because this youth group may be the only place they receive that kind of encouragement. In fact, I had a kid, who had been through a lot, tell me on the phone just the other day because I told him he was “making progress”. He said, “I’d don’t hear that very much any more.” If we ever hope to see kids encounter Christ and ultimately see our youth ministries pass the faith along, it won’t be by telling kids their not good enough, that they’re slackers, or that their not being good Christians, but kids will show up in droves if they know there is a place they can go that will walk with them and encourage them through tough times.

How about you? What are examining on the game film from your last program, small group, or class?

Are you examining your calls? Personal performance? Offensive or defensive schemes?