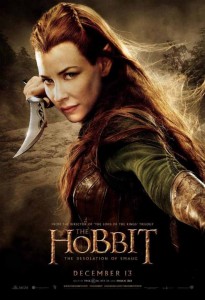 I went to the midnight showing of The Hobbit: The Desolation of Smaug and the movie did not make me regret getting home at 4:00 a.m. and getting back up at 6:00 a.m.. I would do it again just to watch this conversation between Tauriel, an elf whose not an actual character in the Hobbit book, and Legolas played by Orlando Bloom.

This conversation is happening in churches across America between lay people and leadership.

These two Christian “elves” see the world in  different ways. Christians who see the danger of the “evil” in our world and  those “other elves” who see the “evil” and ignore it’s creeping shadow.

We can choose to be the “elf on the shelf” but the evil of poverty, racism, bullying, and other ills are not going away no matter now much we tighten our borders of doctrine and tradition.

Lone Christians cannot fight evil alone but someone has to go first. If you are that Christian, don’t worry, someone will follow you, miss you, and then will join you.  Maybe this is why Pope Francis is person of the year. He left the borders of the comfortable and engaged the evils of his world. And many are following his lead.

Whatever we think is “not our fight” will soon be standing at the door of of our shady chapels. It is our fight. If it is not the church’s fight, meaning every believer, then whose fight is it?

Tauriel brings a scathing indictment of the Elven Kingdom and it’s leadership, which many Christians  are echoing to their churches,    when she says, “If your father has his way we will do nothing, we will hide within our walls, live our lives away from the light, and let darkness descend.”

She closes this brief conversation with two  poignant questions that every believer, must ponder, and answer for themselves when confronted with them,

“Are we not part of this world?” and “When did we let evil grow stronger than us?”

Evil will never be stronger than God’s church but  shining our armor and protecting the borders will not chase it away either. Grab your weapons, a friend or two, and join whatever fight is worth fighting  in your community.