I recently spoke at Life For Youth Camp, the camp I received Christ at when I was 13 years old, and my mind was blown. Here’s the first mind-blower, I had five girls attending camp this summer who were aging out, they would not be able to come back. All of them chose my week of camp for the last seven years. When I thought about it, it really humbled me. Who am I that kids, teenagers, who would commit a week of their summer at based on the fact that I was speaking. To honor them I secretly put together a short graduation service for them on last night of camp.I made them some graduation boards, had then line up for Pomp and Circumstance, and gave them their graduation diplomas. 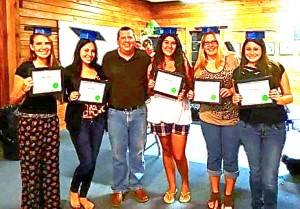 You can watch the video down below on how I made the grad hats.

It was a sweet and surreal moment. The kids who attend my camp are like another youth group to me. I pray for them and follow up with them they commit to Christ. The fact they they were all moving on and I would not see them again next summer was sad and yet I felt like it was a moment of accomplishment for them and for me. But, the mind blowing had just begun.

The next mind blowing moment started after I had done the grad ceremony with these five students. I knew there had been a few campers on staff and I heard from some of them “You never did that for us?” I said, “Well, I just thought of it this year, man.” Anyway, I came to find out that we had 15 former campers on staff. Some of them I knew really well and others not so much. So, I decided to honor them as well. I made more diplomas (but no hats) and had them stand up to receive them at the staff meeting after the Friday night service. I asked each of them how many years they had been to camp. The number ranged from two to nine. I then asked how many of them had been at the camp  or received Christ during my week of camp and all of them had raised their hand for one or the other. Brains cells exploded everywhere. I fully understand that many factors were a part of them becoming counselors and not just my influence, but I am proud to be a part of all their stories.

It’s easy to say I bragging, but to be honest I had not been keeping track except for the number of years I had been going out to the camp. Tomorrow I want to share my thoughts on how I think I intentionally/unintentionally arrived here.

What does building a legacy in student ministry look like to you?

Have you experienced it? What has your experience looked like?

Let me know in the comments below.