Kings Faith Is A Royal Treat 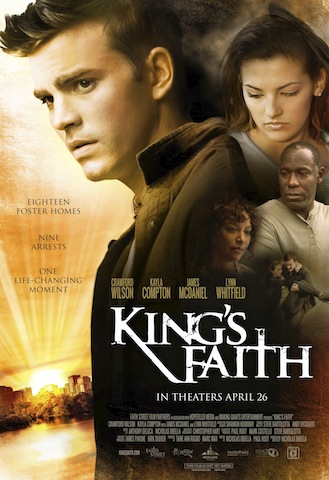 Let me say up front that I am critical of Christian movies. Ask anyone. And yet, Christian films are getting better. Two years ago I took my kids to see To Save A Life. The story was good, the acting was above average, and the stars passed the teen-cool litmus test. That was the last Christian movie I was excited about, until now. Kings Faith, from Faith Street Films, will be coming to theaters April 26th. I did not have high expectations for this film, but what I found was not a Christian movie, but a movie done well.

Kings Faith tells the story of Brendan King (played by Crawford Wilson – “Secrets of the Mountain”), who, in my opinion, look like a young Josh Duhamel (from “Transformers”) a young man who discovers that leaving behind his violent is not that simple. He’s been in and out of foster homes and finally lands with a new, Christian family, The Stubbs, played by Lynn Whitfield ( “Madeias Family Reunion”) and James McDaniel (“NYPD Blue”). The Stubbs must face their own demons as they deal with the passing of their son, a police officer, who was shot in the line of duty.

Brendan King enters this Christian home with a faith of his own so the climax of this story is not whether King comes to faith, but how he reacts when his faith is tested. As King moves into the his new school, he gathers the stereo-typical supporting cast of endearing castaways who look up to him and the bully jocks who despise him. Kayla Compton (Perception) plays Natalie, the girl from the broken home who has a secret and is drawn emotionally to Brendan because of his strong convictions.

Through-out the movie Brendan’s past comes calling. Former friends and gang members, headed up by Eli, (perfectly played by Brandon Correa) hunt down Brendan and threaten to destroy his new life and family unless Brendan tells him where he hid the gangs stash of money and drugs. These are some of the most tension filled moments in the movie and adds that real world danger element to the story.

The greatest compliment I could pay to this movie is that there were times when I forgot I was watching a “Christian” movie. Rather, I felt like was watching a story that included people of faith trying to do what is right and find redemption in a messed up world – much like our own lives. More good news, there is a group study guide on the films website for working through the themes of the movie with your youth group. I’ll be marking the calendar for this film because it’s a movie that could leave a mark on our students.