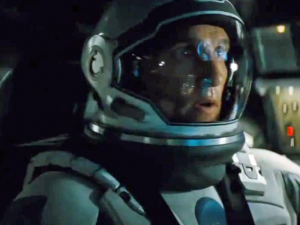 Have you ever sat at the end of a movie a didn’t know what to feel about? Did I like it? Did I hate it? I wound up in the messy middle about Interstellar. The story is solid but has some problems with the narrative as some  dots in the plot did not connect for me. The performances by all the actors were passionate. I felt myself empathizing with Matthew McConoghay and his struggle between saving his family and saving the earth. One of he coolest feelings I had while watching the movie was the sudden smallness I experienced inside the CGI galaxy  (which did not feel like CGI). I felt lost and overwhelmed, in a good way, within the universe director Tony Nolan created. Cue existential crisis.

I look for God in the movies I see and I found Him poking around in Interstellar. The vastness of the universe portrayed amazed me and make me think of verses like

By faith we understand that the universe was formed at God’s command, so that what is seen was not made out of what was visible. Hebrews 11:3

The heavens declare the glory of God; And the firmament shows His handiwork. Psalm 19:1

As the movie moves along, it’s pointed out that some aliens may have offered a solution or way of escape from Earth’s failing food shortage problems. God is a way-maker and if we needed to leave planet earth for some reason God would surely have a place for us to go just the way God knew we all have to die and He made a way, through Christ, to get to Him.

If you are a Pastor, there are a few quotable lines you could grab,

We’ve always defined ourselves by the ability to overcome the impossible. And we count these moments. These moments when we dare to aim higher, to break barriers, to reach for the stars, to make the unknown known. We count these moments as our proudest achievements. But we lost all that. Or perhaps we’ve just forgotten that we are still pioneers. And we’ve barely begun. And that our greatest accomplishments cannot be behind us, because our destiny lies above us. – Copper (McConohay)

I love this quote as we have only scratched the surface of God as deity and and Father. We should never lose the wonder of God.

This quote works well with

Set your minds on things above, not on earthly things.
Colossians 3:2

All in all, the movie will catapult your emotions, like a rocket, into universal themes such as family, sacrifice, and our place in the universe as well on planet earth.

Here are a few more of my posts on movies

Comic Book Movies As A Catalyst For Spiritual Growth

7 Tips For Turning Movies Into Messages