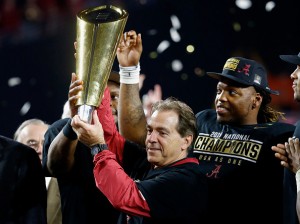 GLENDALE, AZ – JANUARY 11: Head coach Nick Saban of the Alabama Crimson Tide celebrates by hoisting the College Football Playoff National Championship Trophy after defeating the Clemson Tigers in the 2016 College Football Playoff National Championship Game at University of Phoenix Stadium on January 11, 2016 in Glendale, Arizona. The Crimson Tide defeated the Tigers with a score of 45 to 40. (Photo by Sean M. Haffey/Getty Images)

Last night Alabama won their 16th National Championship against Clemson. It was the kind of game where I felt good about whoever won. Both were worthy of a championship.

Dabo Swinney is a heck of a coach and a motivator.

“BYOG, Bring Your Own Guts”

Nick Saban is a all about discipline and the process.

This is not to say Dabo does not preach discipline but I do think his process was different and in the end I think process trumps passion.

Passion is exciting and fun to watch.

Process is a grind.

Process is inconspicuous (until you watch it unfold)

Passion can get distracted.

Alabama’s coach has been poked fun at because he doesn’t smile much; yet, I see him smile at the end of every championship he’s played in.

Both coaches are passionate in their own way.

Both have a process.  One was better than the other.

If I had to choose between passion and process I would choose process.

You can add passion to your process but it’s much harder to add process to a passionate, flamboyance.

You can smile now because of your passion.

I will smile later, after I work the boring, not very sexy, process, while I’m holding the championship trophy.