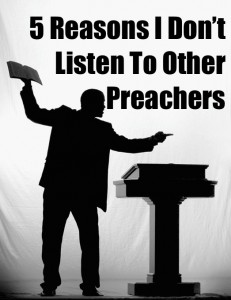 This is easy to do in various circles, but being pentecostal, it’s super easy. Tone of voice, delivery, etc, is an easy thing to pick up on in my culture, but I don’t want to be “like” anyone else. Even though there is nothing new under the sun I still don’t want anyone to say, “You sound like, act like, preach like…”  anyone else.  Like the adage says, I would rather die an “original” than live as a copy of someone else.

2. I don’t want to be tempted to plagiarize

Once again, there is nothing new under the sun. I have no original thoughts and something I have preached has been preached before in a similar manner or style. There are Pastors and youth workers who take their cues from other preachers and that is their choice. I don’t want to be too hard on them because their congregation or youth ministry may need to hear that exact message but I don’t want to cheat my students and myself by not wrestling with the scriptures and in prayer with God for what God wants to say to my youth ministry through me.

3. I don’t want to judge my brother in Christ.

Social media has changed everything. Every pubic person is under scrutiny, including preachers. I don’t hang on that grapevine. I don’t know if I even care what’s happening in my own denomination let alone other preachers. All preachers are human and prone to fault. I don’t want to hear them preach and then see a tweet, FB post, etc about them doing something stupid. There is enough drama in the world. I just don’t invest time and energy into the cult of personalty because it only leads to disappointment.

4. I don’t want to play the comparison game.

I have been in some churches where I loved the youth ministry but I did not like the preaching. Maybe it was the delivery or tone or listening to plagiarized messages, it could have been a number of things. I can remember wishing that my Pastor was more like “name your favorite preacher here” but it wasn’t fair to my pastor to expect him to be like someone else. If you are in a church where the preaching is awful, I don’t blame you for listening to other preachers in order to feed your own soul, just remember that your pastor will never be “them”.

5. I don’t want to exalt other preachers in my own mind.

We have exalted preachers to superstar status. Depending on your denomination or lack of one, I bet you hear things like “Did you hear so and so say this? ” or “Did you catch their series on….” . I am not a hater nor am I sucking on sour grapes that I am not where they are. I just don’t care what others are doing or preaching on. That is not to say that I don’t catch on to cool themes or ideas but I guard my heart against thinking that “this guy” has what my students need to hear.

Now, will I catch a message from  time to time? Sure. It’s inevitable that I will hear others preach at a conference or another church but I cam careful to guard my heart against relying on anything other than the Holy Spirit and the Word of God to inspire and teach the students that God has given me.

Do you listen to other preachers? Who?

Do ever find yourself caught up the cult of personality or preaching and preachers?

Do you deal with some of the issues I deal with? Which ones?

Let me know in comments below.